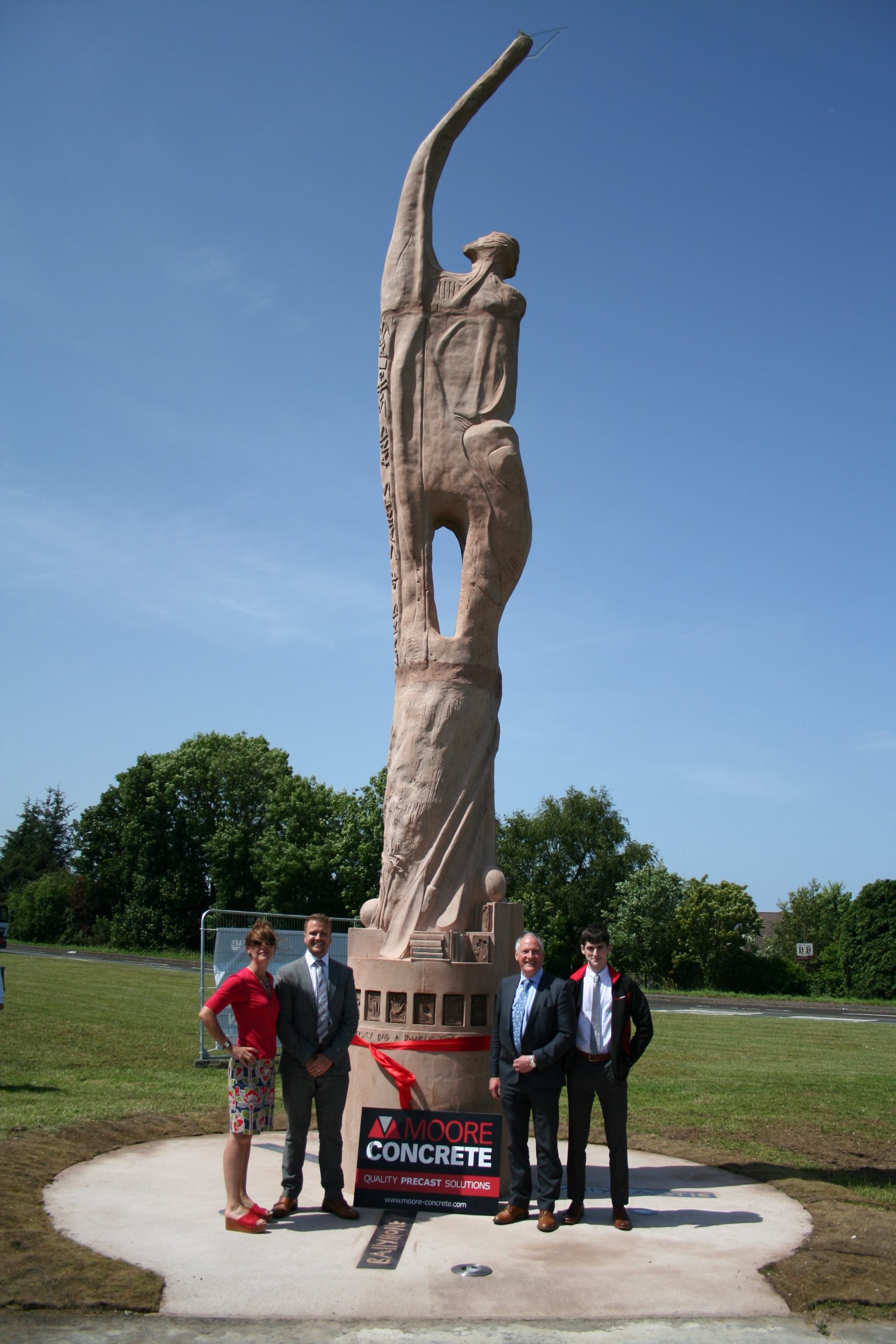 The largest Irish sculpture ever to feature the use of a sustainable mix in its precast concrete has been unveiled as part of the celebrations held to mark the 50th anniversary of Ulster University.

This unique work, created by local artist Sara Cunningham Bell, now stands proudly as the focal point of the Lodge Road roundabout on the outskirts of Coleraine.

“The work was given the green light by the university courtesy of a competitive interviewing commissioning process,” The name ‘Towards Tomorrow’ reflects the concept and symbolism behind its tall form.

“It has been conceived to reflect the interaction and engagement between the university and the communities making up the town of Coleraine and, the Borough of Causeway Coast and Glens.”

“It also encapsulates the ongoing, dynamic relationship between the town, its people and the University.

“Coleraine was the university’s first campus location, opening its doors to students in the autumn of 1968.”

There is a tremendous degree of synergy between the new sculpture and its location.  As Sara is quick to point out

“It works visually at both a micro and macro level,” she added.

“Yes, it has scale. But closer inspection reveals a series of features around its base, which were inspired by many of the current students and Coleraine residents, who make up the multi-layered community that is so associated with the town.”

Sara has a track record of creating large scale public works-of-art and, crucially, getting them to the finish line on schedule. An excellent example of this is the 90-metre long, 6 metre high sculpture, which now features behind the Premium Stand on the east side of Ulster Rugby’s Kingspan Stadium.

Sara’s latest commission is 9 metres in height. It depicts a student dressed in a graduation gown and holding a quadrant. The base of the statue features a number of objects, reflecting the world of academia, the arts and sporting achievement.

“This impressive sculpture is our gift to the local community. It will stand as a symbol of Ulster University’s past present and future in Coleraine and the surrounding area.”

Sara explained that precast concrete was used in the creation of the statue because of the material’s sustainable nature and its ability to stand the test of time.

“All the contributors to the project are located within 30 miles of Coleraine. In addition to the precast, high specification steel work is also included in the design,” she said.

Ballymena based Moore Concrete was the company selected to come up with the required concrete specification alongside a Research and development company in Coleraine, Moore Concrete also carried out the final pour.

“This is one of the most complex projects that we have worked on,” confirmed Moore’s managing director Wilbert Moore.

“From the outset we knew that very intricate moulds would be required for the job,” he said.

“There was also the technical challenge of getting the specification of the concrete used just right.

“But it was all worth the effort. The statue is now in place. It will serve as a landmark piece of art for the Coleraine area, reflecting the heritage and the fact that the town has developed into such an important centre of learning over the past fifty years.”

Moore Concrete we delighted to be involved in 2 projects short listed by the prestigious Construction News Awards held at the Grosvenor House Hotel, Mayfair London on the 15th Sept 2021. Moore Concrete manufactured precast elements for both projects in collaboration with VolkerStevin. Fairhaven to Church Scar Coast Protection Scheme Health, Safety and Wellbeing Excellence […]

Ballymena-based precast concrete firm Moore Concrete continues to grow its team by appointing 6 new apprentices, bringing the company’s workforce to over 160. The appointments also mean that 11.4% of the firm’s workforce are apprentices. The announcement was made during NI Apprenticeship Week – a DfE initiative designed to raise the profile of apprenticeships across […]