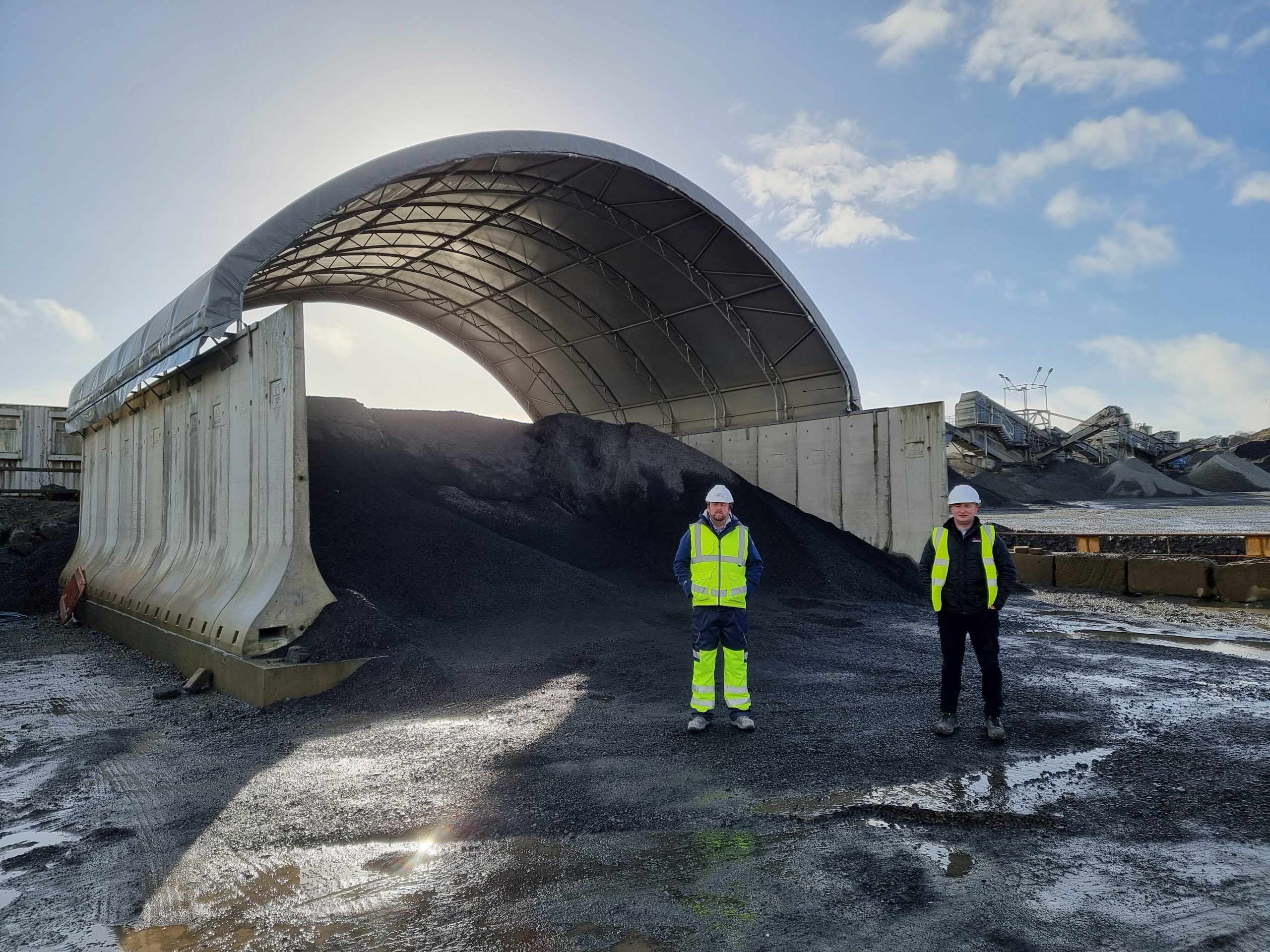 One of the most innovative examples of recycling now taking place in Northern Ireland is the re-use of asphalt in the production of new road surfaces.

Leading the way here is Northstone Materials, part of the Northstone NI group.

“Asphalt that has been dug up from a road in need of repair can be re-used very effectively to produce a new high-quality road surface.

“Once the old asphalt has been brought back to site it is reprocessed, producing small stone like chips called RAP that can be used in the production of new asphalt.

“Naturally, this creates the need for a storage solution.”

In the case of Northstone Materials, the company had already built up a 1,200 tonne reserve of RAP, so a quick, flexible storage solution was needed.

“We investigated possible storage options for the material, we needed something high and heavy enough to retain the volume. Ideally, it could be put in place quickly and have the strength to support a canopy, to keep the RAP as dry as possible.

“While exploring options we discovered Moore Concrete’s Bunker Walls, these ticked all of our boxes – which is why we have just completed the second store, with more planned in the near future across multiple sites.

“The units specified are 3.6m in height with each weighing 3 tonnes,” Andrew explained.

“The two RAP stores that have been put in place over the past two years each have a floor area of 12m by 12m.

On the ease of installation:

“It took the Moore Concrete team 2-3 days to put the wall units for each of the stores in place.

“It was an extremely efficient process in comparison to the other options considered. Each of the units has also been designed to allow the straightforward attachment of the roof.”

“One of the big bonuses of Bunker Wall units is that they can easily be moved and used for other storage projects in the future.”

Moore Concrete’s Conal McMahon was a recent visitor to site. He explained:

“Flexible bulk storage is in strong demand across multiple sectors, we have a wide base of customers ranging from construction companies such as Northstone to golf clubs, waste management companies to farmers,” he confirmed.

“The unique curved shape of the base has been developed to allow the free flow of material to the floor. There is a 100mm straight portion at the bottom edge to aid the removal of material from the bay.”

“Bunker Walls provide a solution with the flexibility to increase the capacity of any storage bays or reposition units as they are easily moved using a forklift. Another useful feature to note is that walls up to 3m in height do not need bolted down when retaining material such as grain, solid fuels, recycling materials and wood chip. In most cases its simple – lift and place with a forklift.

“Bunker Walls can bear weight on both sides and have a narrow base allowing for maximum use of space and easy bay creation.

According to Conal, Moore Concrete have had a surge in demand for these precast units.

Prestressed Panels vs Shuttering Should I go with precast concrete or shuttering? That is the question faced by farmers when the time comes to invest in new sheds, silos, stores, livestock housing….the list goes on. The main factors that constantly prevail are: Quality Time on site Longevity Versatility   Why Precast? Quality Precast concrete is […]

One of the most innovative examples of recycling now taking place in Northern Ireland is the re-use of asphalt in the production of new road surfaces. Leading the way here is Northstone Materials, part of the Northstone NI group. Business Improvement Manager, Andrew Delargy, takes up the story: “Asphalt that has been dug up from […]